Two mythical places for mountaineering, one at the foot of the Mont Blanc, the other at the foot of the Matterhorn linked by a route of about 180 km. Who could resist? Along the way, eleven mountain passes (the highest being 2965 m), glaciers, mountain lakes, exciting staircases nailed to rock and a handful of unforgettable experiences … Do you join us?
Logistics:
What we found most comfortable and cheap was to fly to Geneva, and from there, hire a shuttle service from the airport to Chamonix (alpybus.com, highly recommended) and for the return, the same, direct minibus to the airport. We brought our tent, although we planned to make use of some of the incredible shelters that make the route affordable to walk without the excess of baggage. There are many places to restock and therefore you do not need to go self-sufficient, carrying food for two-three days is enough. It is also easy to get water along the way. Our travel guide: Cicerone’s excellent guide, by Kev Reynolds. The paths in the Alps look like motorways: everything is perfectly indicated, and only in situations of bad weather and therefore, little visibility, navigation can be a problem.
Story:
We arrived in Chamonix at lunch time, so the reception of the campsite was not open and we had to wait a long time (we can see that the French also take siestas). Once installed, s stroll to know this fancy little city and feel envy of the huge amount of mountain shops there. We had a disappointing raclette in a downtown bar and went to sleep, as we were leaving early in the morning.
The first day of the route, to save us a couple of hours of hiking without much interest, we took a bus to Le Tour (1453 m), and from there we began the ascent to Col de Balme (2204 m) with a splendid weather; the border between France and Switzerland passes by that place. Once in Swiss territory, we opted to descend on a path that seemed more panoramic to us, passing by the Refuge des Grands, near the Glacier des Grands and overlooking the aesthetic Glacier du Trient. Finally, our stage ended at the small restaurant Chalet du Glacier (1583 m). It’s funny: right next to the restaurant there is an area where people camp, there are even remains of bonfires, although in Switzerland free camping is forbidden. When we arrived, there were several little groups of people who were clearly waiting for the restaurant to be closed to pitch their tents, but we opted to directly ask the owner for permission to do so, thus getting the best spot, overlooking the glacier. It’s usually better to be direct. 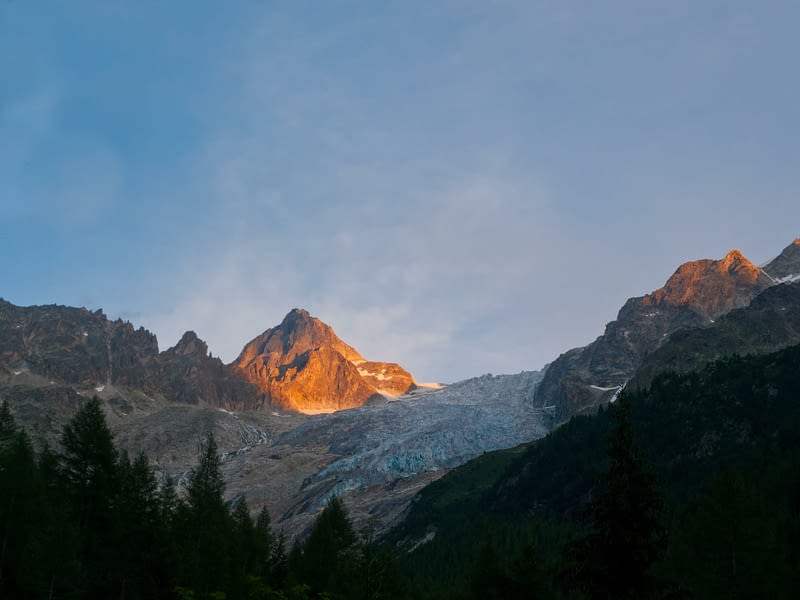 The next morning, a difficult stage, coinciding with the second day of trekking (which as we said here, for us is usually the hardest). It’s the climb to the Fenêtre d’Arpette (2665 m), with spectacular views to the Glacier du Trient at first, then trough a more rocky and arid zone. The climb was particularly hard to Carlos. 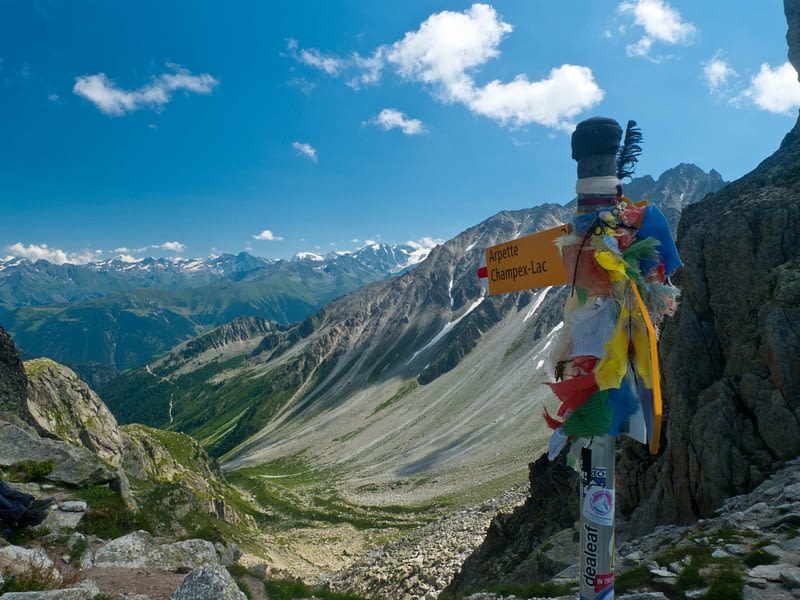 This stretch is very busy, because it overlaps the tour of the Mont Blanc, just like the previous stage. Once you get up there, the views are wonderful both ways. Then, it descends (abruptly at the beginning) to a small village next to a lake, called Champex (1466 m), where we camp. In the descent we met a couple of Spanish girls with whom we were striking the strand, and which we would see later on the route.
The third day is quite comfortable, with no need to climb at all; it wanders through the Val d’Entremont and allows you to discover idyllic Swiss mountain villages. We prolonged the stage a little in order to cut something of the following day; in theory it finishes at Le Châble, but we went up to Les Verneys, where we settled (discreetly, of course, this time there was no one to ask for permission) next to a church, with public bathrooms.
Next stage: climb to the Cabane du Mont Fort (2457 m), with poor weather. 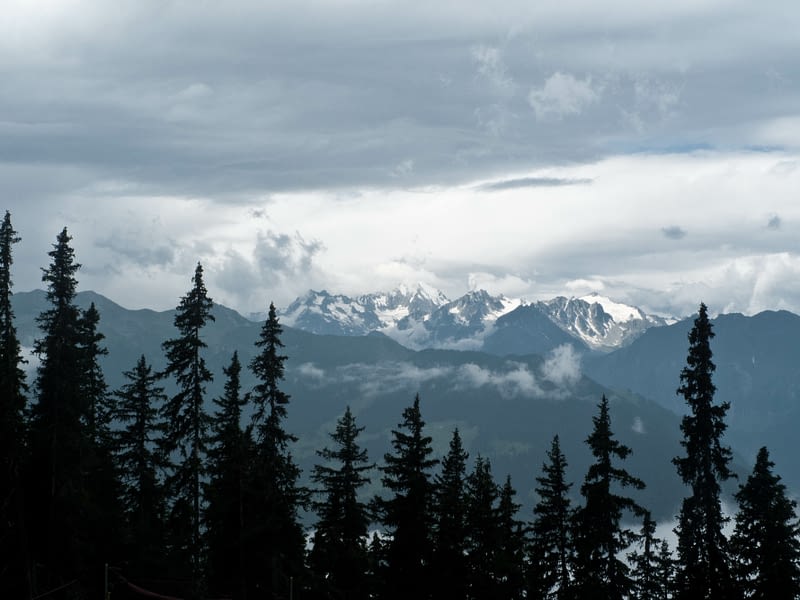 It was cold, it rained most of the time, and it did not invite to enjoy the day. In fact, the climb became quite hard despite not having much slope due to the weather. Memorable what happened to us in Clambin, where we stopped to have a coffee and warm up a bit: we saw a cake that called us from a distance, but for not spending too much we decided to ask only for a piece and share it; The waiter said “I can not charge you for it, because it’s from the day before”. “Well then you put us two pieces !!” we said with laughs. Very friendly the waiter, and the cake, tasty. It took a lot to leave the bar and keep walking, but that’s the reason we were there in the first place… Fortunately, the weather improoved a little and by the last stretch it was no longer raining.By the way, that stretch seems to be very long, because you start to see the cabin, but the bends of the road makes it take an eternity to reach it … It is desperate! Once there, surprise! Most of the people we had seen the day before, including the Spanish girls, have already arrived because they had taken a cable car; in fact, we are the only ones who have walked up that day. The shelter is super good, very comfortable, the food delicious, and we allowed ourselves to share some beers with the Spanish girls in a time of pleasant talk.
The next day, one of the finest stages on the route: four passes of about 2900 meters, reaching the highest point of all: Col de Prafleuri (2965 m). There were two variants, and we chose the one that according to the guide is safer in case of bad weather. Once finished, and having talked with people who did it on the other way, we do not agree with what the guide recommends: the ascent to Col de la Chaux (2940 m) is made by a rocky area that is totally shady, and that after the rains of the previous day it was freezed, which gave us a few slips and some frights. Once up there the sun warms, and the rest of the day was splendid. The ascent to Col de Louvie (2921 m) overlooking the Lac Louvie is impressive. On the other side we found some snow, and in fact we had to go down a short slope by dragging our ass along a snow slide. The panorama under the Glacier du Grand Dessert, with its small glacial lakes, is also worthwhile. 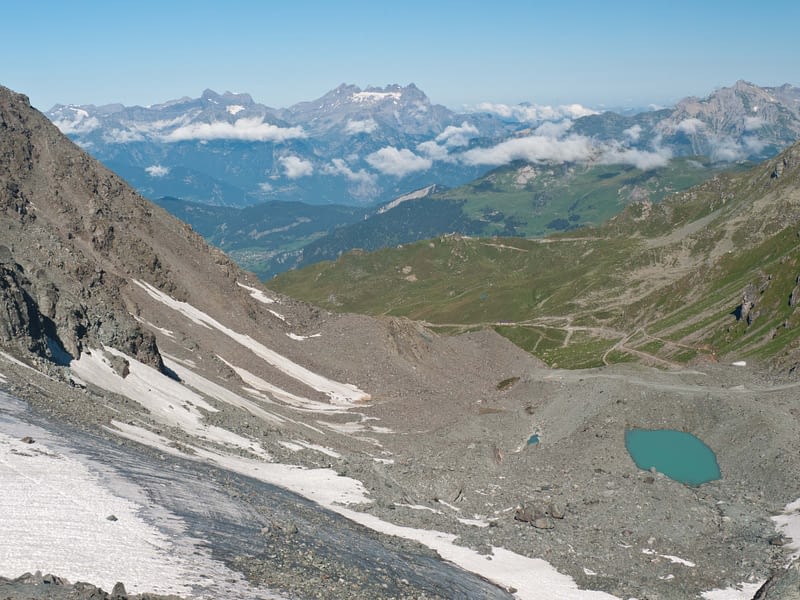 Immediately you reach the Col de Prafleuri, although you pass through an area where the road becomes somewhat confusing and it might be easy to get lost. Afterwards, we descend to the Cabane de Prafleuri, where according to our guide the stage ends. We decided to go a little further, climbing a new hill (Col des Roux, 2804 m) and discovering a spectacular panorama on the other side, this time just for the two of us. That is one of the disadvantages of this type of routes: there are too many people. Not that it is overwhelming, but you hardly have the opportunity to feel on your own way. By getting out of what the guide dictates, we get those instants of isolation we sought. We could see a herd of chamois just below the Glacier des Ecoulalies, and an unforgettable sunset from the small Refuge des Ecoulalies, where we slept. We had it to ourselves, too, because this shelter remains open but it is not manned, and there is simply a mailbox to leave the money that you consider. 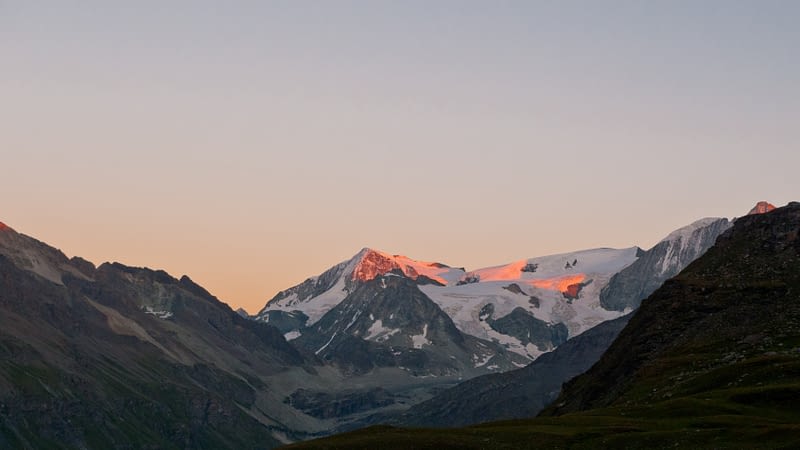 You can see all the photos of this travel here.