In the heart of the Pyrenees, in the Natural Park Posets-Maladeta, is located this beautiful route that takes us to circumvallate and discover the surroundings of the two highest peaks of the Pyrenees. Following mainly the route of the GR11 trail (and some of its variants), and along its 85.7 km (with a total of 5964 m of elevation), it shows us, through alpine meadows and stony climbs, the beauty of this place, full of precious lakes (ibones) of cold waters.

Actually, there are two circuits (Posets tour and Aneto tour), which can be done independently, or linked via Benasque. That was the option we took, taking advantage of staying overnight and replenishing forces in said town. Benasque was also the start and end of the route, and honors its title as the logistic center of the natural park, because it has an interpretation center, food and mountain shops, and everything necessary to face the route.

Neither is it necessary to stockpile supplies, since the network of shelters is excellent, and in all of them the option is given to prepare a picnic bag, so you do not have to carry food. In any case, we (Josito, Mony and I) do not resort to that, as we explained here.

Our first stage was short, which was appreciated because we had to make a long car trip to get there. We arrived at Benasque at noon, and the Pyrenees welcomed us with a cloudy weather, which threatened a storm. While we drank some isotonic drinks (namely beers) it started raining hard, which, to be honest, gave us a bit of a slump. One thing is that it rains halfway (in that case, you have no choice…), and another is to start walking knowing that you will inevitably get into it and get soaked. We waited a while, knowing that as the stage was short we had time, but the weather did not seem to improve. Finally, we took the decision, got into the car and headed to the parking lot of Estós, where the route begins. We did a review of Josito’s gear (we have already said it was his first time, we think it will not be the last), we forced him to leave in the car a third of what he has brought, and we started walking in the rain, which was now falling with less intensity. 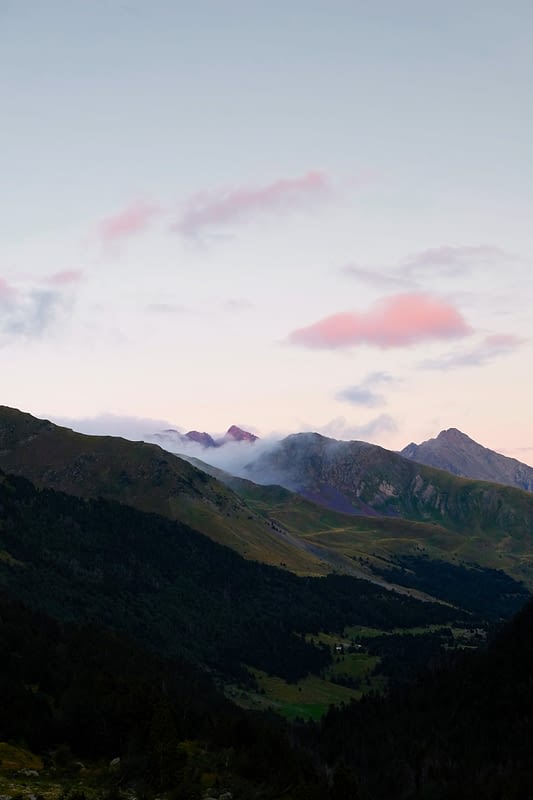 The ascent to Estós refuge runs through the valley of the same name, along a paved road at the beginning, following the river, which has spectacularly colored waters. Further on, the valley opens and you go to an unpaved road and then a path; On the way you can see the waterfalls of Gorgues Galantes, and the famous Turmo Cabin. We met quite a few people who came down after a day of hiking, but we did not see anyone following our direction (no wonder, because we were a little late …). Mysteries of life, just upon reaching the shelter stopped raining. The shelter is acceptably good, although the showers are outside and compared to other shelters, they are a little crappy. But … what the hell, at least you can shower! I will not be the one to criticize the benefits of a mountain refuge. Another of the wonders of the shelters: copious dinner. Then we allowed one of the concessions we made this year to ultralight travel: shots of tequila (conveniently re-bottled, of course…) courtesy of my brother-in-law Álvaro, who gave us a fine bottle. Josito brought some vodka, also. Do not think badly … just a little, to get warm. We have already said that this trip was going to have a strong social component.

The next morning brought good weather, and with it, a mood more willing to walk than the previous day. It also helped to diminish a bit my pessimism about human fate (I’ll explain, as this has sounded very depressing …). Just when we were ready to leave, the shelter guard ran out to find me: someone had found my wallet in the toilets (with documentation, money and credit card) and they were looking for me to return it, intact. My reaction still arouses the laughter of my traveling companions … 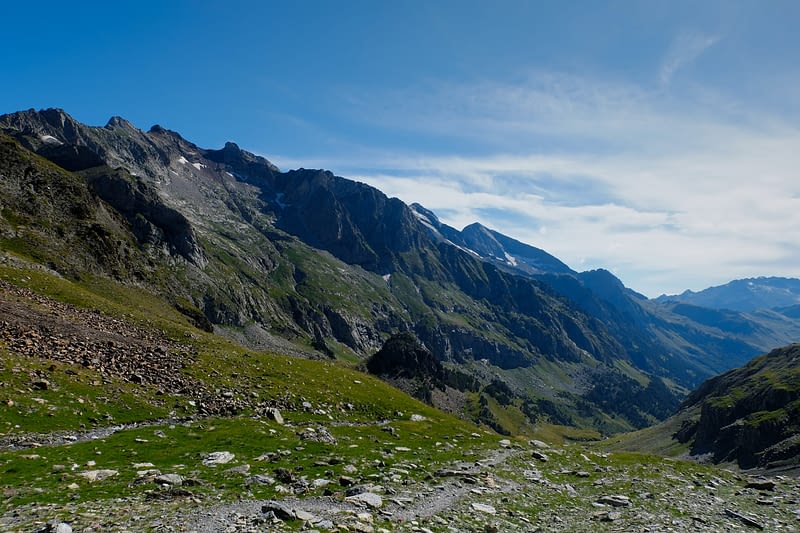 The route itself is quite nice, it does not rise too much or too abruptly, wandering through forest and fields to the Collado de Estós (2572 m), which connects the valley of the same name with that of Chistau. Once up, we stopped to eat, and something happened that changed the course of the rest of the trip: we met Hugo.

Hugo is a vivacious boy and, above all, a chatterbox, who was doing the same route as us, alone. He started talking to us, and decided to accompany us the rest of the trip. From the spanish region of La Rioja, I think I remember (with the huge amount of things he told me, I mix the data, but at least he lives in La Rioja and works in a warehouse), he’s learning to play the guitar (like me), nice, generous … main problem turned out to be that he snores like hell; and he does not know it, or at least he does not recognize it. “Last night in the room they say there was someone who snored a lot, but I slept well”. We hear different variations of that phrase throughout the days, even on nights when we share a room, until we finally reach a conclusion. Hugo, if you read this (I hope so, because I’m going to give you the link), do not take it the wrong way, but understand this: if everyone in the room complains that someone snores and you didn’t notice it because you’re asleep, the one who snores is you. And it’s ok, that does not make you a worse person (well, a little bit, hehe …). 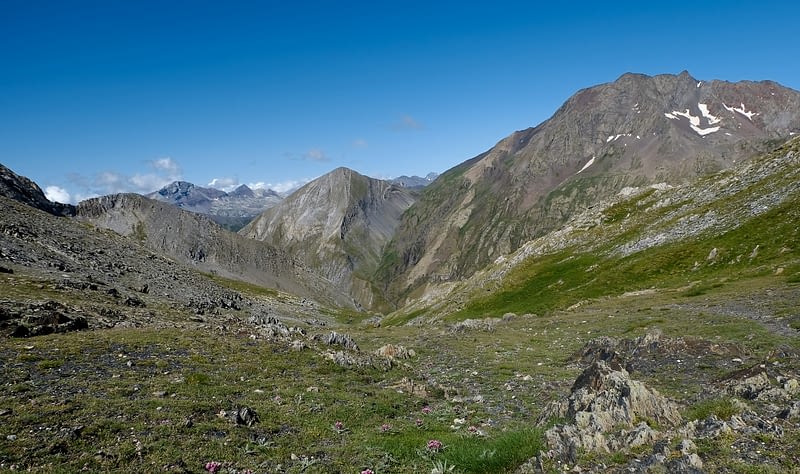 We continue with the route, I’m digressing… After the “collado” begins the descent, which never becomes too pronounced, and that leads to a small meadow at the confluence of three valleys that is an ideal place for a rest: the Pleta de Añes Cruces. From there, after a small climb, the way is all down to the refuge of Biadós (1760 m; I remark that I write it with “b” because the refuge guard seemed to be bother with the fact that in many places it is written with “v”; or was it the other way around?) following the course of the river Cinqueta de Añes Cruces. 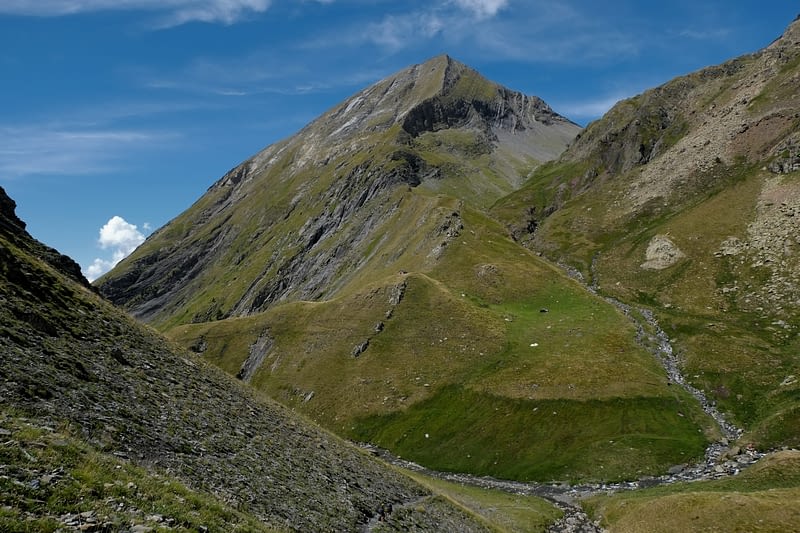 The massif of the Posets (3369 m) is always visible to our left, on the other side of the river, offering impressive views that make the end of the journey more bearable. 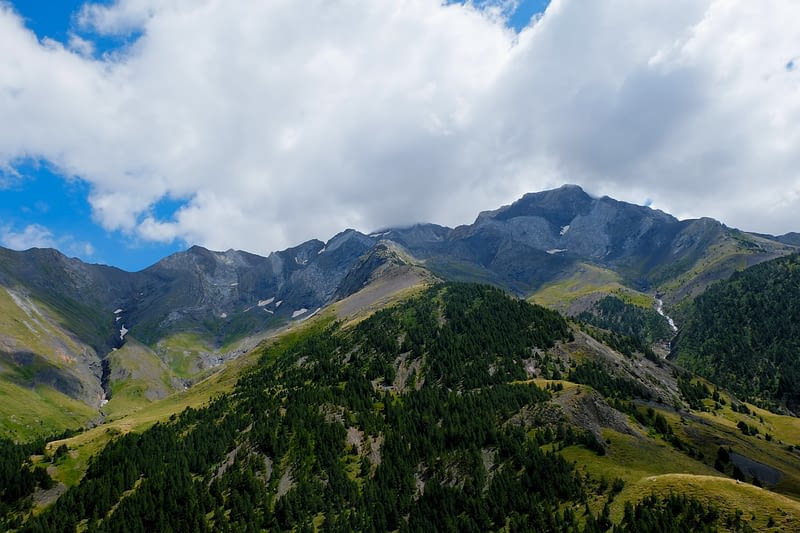 The refuge is great, with clean and well taken care of facilities, although the guard seems a little bit too tense. And it is mandatory to emphasize that the food is marvelous; we took, among other things, a delicious lamb for dinner. Unforgettable.