The story of our first trekking trip (although we had previous experiences…) includes almost everything: camaraderie, excellent landscapes, a blackout, food feasts, storms, hitchhiking … even an unwanted visit in the middle of the night.

Le Tour de L’Oisans. Say it loud, with french accent. Sounds good, right? We chose that trekking for the name (to us, it was like music), to go to the Alps but avoiding the Tour of Mont Blanc (yes, that’s how we are… we enjoy being original) and because the duration fit our schedule. Besides, it has an affordable degree of difficulty, easy access and exit, and a good guidebook (that we recommend!).

Description of the route.

The GR54 (which is the other name that receives this trekking) is a circular route, which can be done in 10-13 days, and runs along 176 km through the Les Écrins National Park in the French Alps. It surrounds the mountainous massif that gives name to the park, and has an accumulated positive elevation of about 12800 m.

The most logical point of access and exit is Bourg d’Oisans, south-east of Grenoble. For lovers of cycling, this village may sound familiar, since it is situated at the foot of the mythical Alpe d’Huez. It has all the amenities (hotels, restaurants, supermarket, mountain gear shops, camping). We flew from Spain to Geneva, and a couple of buses later (via Grenoble) we were pitching our tent in the campsite, which although it is a bit far away from the village center, is ideally located to start the route.

Although we have the guidebook, we decided not to follow it exactly, partly because it describes the route to walk from gite to gite (ie, sleeping in shelters or accommodations in the different villages through which it passes).

The first day was a tough one, leaving Bourg wich is within 720 m, going up to Col de la Sarenne (1999 m.) and then descending to Clavans-le-Bas; in total, almost 1800 m. of positive elevation. It was hard, but the thrill of starting such an experience, along with the scenery and the good company, made it more bearable.

We make a paragraph here to comment that the weight we were carrying on our backs could be around 16 kg (14 kg in female version). 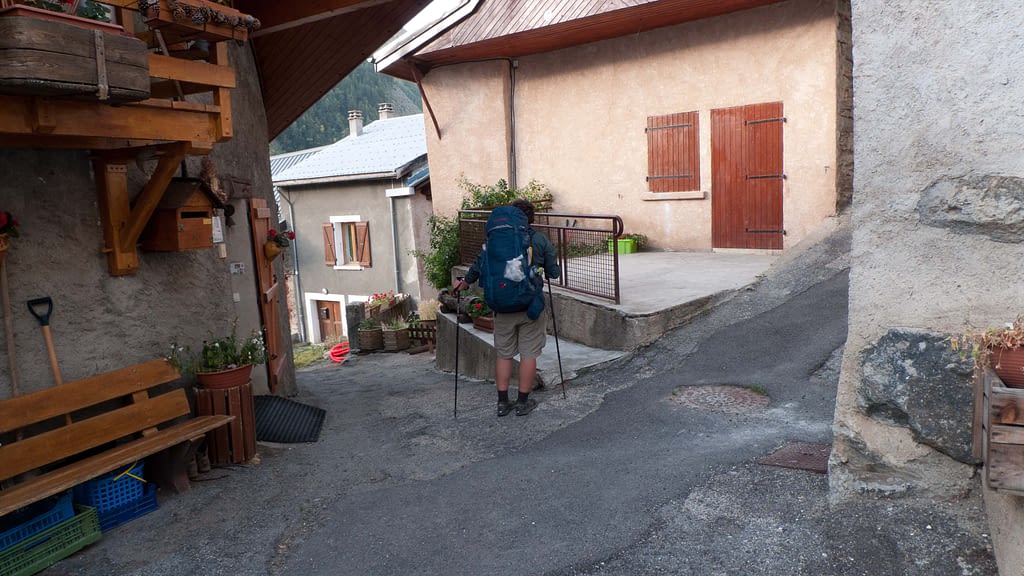 We had read things about ultralight material, and we had some concepts clear… but still, we were loaded like mules. For example, we brought chorizo from home for a few days (which, until we ate it, weighed a whole bit) and always, whenever we passed through a fountain, we loaded water to the top (sometimes we keep on doing that; maybe this subject deserves a post on this own, because most times it’s a pain, but sometimes it saved our ass).

On this first day there are a couple of interesting anecdotes … we slept in an old cemetery, but I didn’t want to tell Mony until the next day, for not “scaring” her. So, besides not letting her see the guidebook (which tells the story of the place) I had to distract her so she would not approach a sign where it was also explained. The other anecdote is that my project of mega-ultra-light sandal (made with an insole and elastic cord) failed at the first chance. So the next day I had to buy a pair of sandals in the first village I arrived (some Teva that are two sizes bigger than mine; but they were on sale, and I still use them a lot). Moral: the cheap (and excessively ultralight) gear is expensive.

The fact is that although a priori the day was easier (about 990 m of accumulated positive elevation), it passed through three consecutive “cols” (mountain passes), between 1900 and 2365 m. Besides, after the last col we couldn’t find any place to refill our water bottles (in which we trusted, because puddles filled up with cow shit we found many). The fact is that I (ie. me, Carlos) had a huge blackout. And that happenned despite the fact that the views (which always help lift the mood) were tremendous: La Meije (3982 m.) can be seen almost all the way.

But we add the fatigue from the previous and the present day, the weight of the backpack, the dehydration, my deficient physical condition (take a look at the photos, you only have to see me) … and as a result I almost could not arrived. We planned to camp in a place where (as I had seen on a French forum) people used to, but we did not find it, nor did we bring water enought to camp (you know, you have to have dinner, have breakfast, drink … and it helps to clean yourself a little). The fact is that we had to walk more than planned, which almost crushes me. Mony stepped forward, and by the time I got to Le Chazelet she had already found a fountain and was waiting for me with a bottle full of water. For a brief moment we wondered if we could load water and go back to look for the camping site, but I was not in the mood for jokes. We found a gûite, had a shower and had the biggest banquet being in the mountain that we have possibly ever eaten. I do not remember very well what it was, only that it was rich and tasty, and that after the desserts they brought a huge table of cheeses for everyone to serve … oh, if they had been brought before! 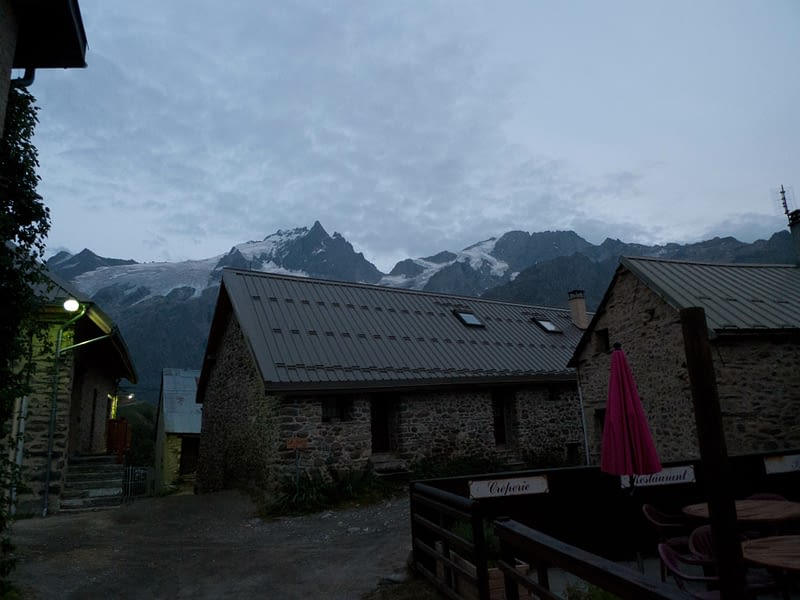 Not a bad place to stay, right? The dinner was delicious!

Next stage, I found myself more recovered, and having already assimilated how things work in the Alps: every day you leave a place, you climb a col more than 2000 m high and fall back to another valley, completing about 1000 meters of height gain and loss. But do not misunderstand us… the routine being always the same does not mean that every day is not different from the previous, nor that it becomes monotonous, or that it isn’t worth it. This stage took us to the Col d’Arsine (2340 m), but what is worse, it was our first experience with rain (being trekking, you know… we are from Cordoba and it’s dry, but not that much). To get wet from the inside and from the outside is not the most pleasant experience in the world, but as it’s not that like it rained all day, it was bearable. In addition, the landscape was amazing, with views to peaks of more than 3600 m (when the clouds cleared a little). The fact is that by the time we got to the col it was not raining anymore, and that allowed us to see our first groundhog coming out of its hole to check if it was rining or not. 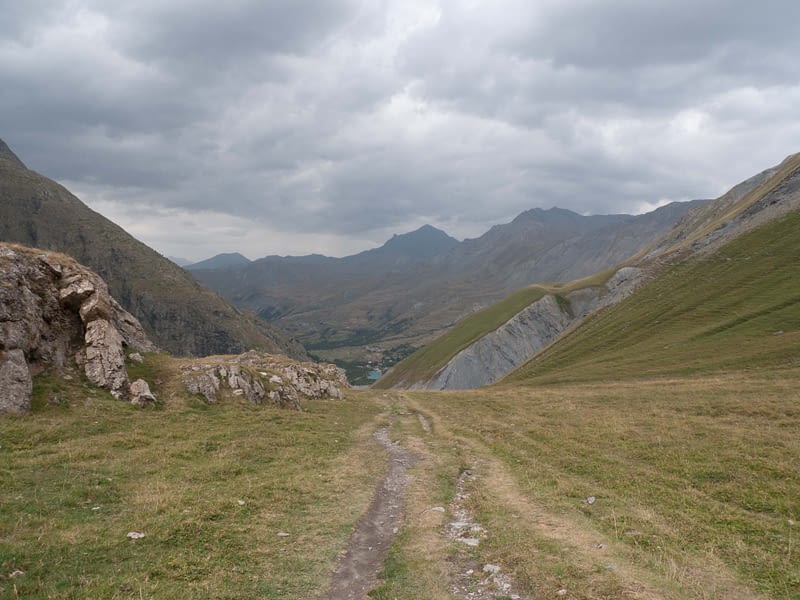 No rain, at that moment…

Monica (who always arrives to the top before me) warning me from a distance of its presence didn’t seemed to please a guy who was walking around with his camera, trying to take pictures of the animal…

That day we’d planned to camp, and we did it in a beautiful place, next to Lac de la Douche, at almost 2000 m, overlooking the Arsine glacier and the Montagne des Agneux (3664 m). Another first time, since we had never slept so high, nor so isolated, nor so “in the outdoors”. Wake up there and see the sun dawn, another unforgettable experience. It is worth mentioning that here was also where we first used our “kit for shit in the field” (which deserves a post by itself). 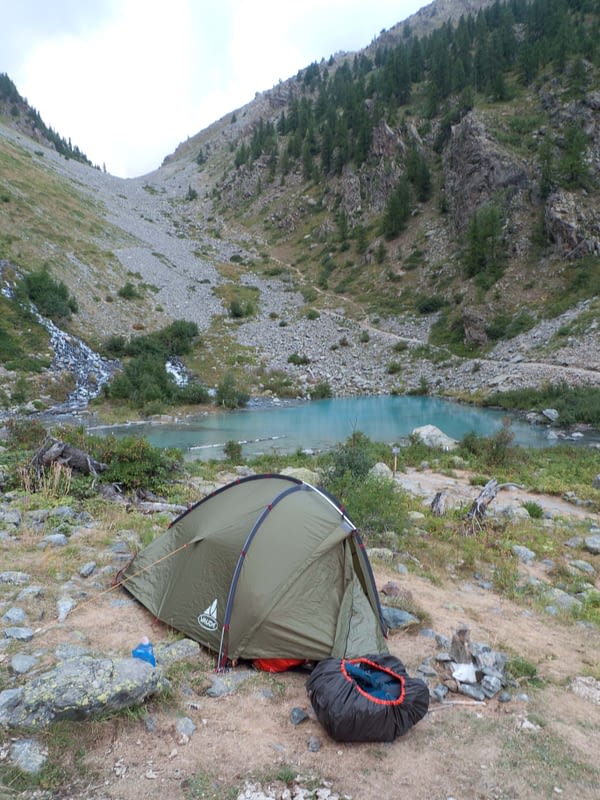 The next day (and this is scoop, because we have never told anyone) I was exhausted, so I decided (and Mony supported me) that nobody was going to walk that day. So we went down to the first village with bus service, we took one to Vallouise, we looked for the camping, we pitched our tent and we went to the village, which is quite nice. And I will make a side note here: some of the beautiful villages on the route well deserve a visit, or a quieter exploration (a thing that we, loaded as we were, did not). The fact is that we discovered a pub where they made their own beer, and after a couple of pints we were almost drunk. To the magical power of beer we added a huge burger, and the next day I was already like new. Well … more or less … (to be continued).

You can view all the photos of this travel here.

As we always say, english it’s not our mother tongue. So don’t be harsh with us…