(Comes from here)
The sun starts to show, and it seems that the landscape is only for us; Well, for us and for the marmots that we will find throughout the morning. The day starts off easily, going down to the Lac des Dix and following its western margin towards Mont Blanc de Cheillon (3870 m) and its glacier. Although we did not reach such an impressive mountain, as the road turns to the left and goes to Pas du Chat (2371 m). Well, our path deviates, because there is a variant of the route that leads to the Cabane des Dix and that later goes across the glacier. 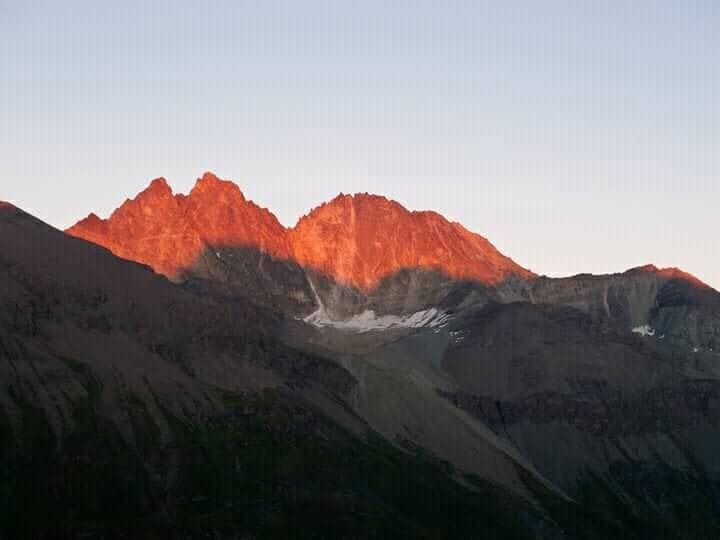 Why are they called Aigilles Rouges (Red Needles) de Cheillon?

We choose (for safety, since we do not carry any kind of material to glacier crossing) to cross the torrent that comes from the glacier through the Pas du Chat and continue directing our steps, now gaining height, towards the famous Pas des Chêvres (pass of the goats, 2855 m), as an alternative to the Col de Riedmatten (2919 m). We have to recognize that at this point we get a little bit out of the track. Finding the Pas du Chat itself (with its bridge and everything) took an excessive amount of time, because we skipped a detour. After a while, there was another moment when we got confused and tried to climb a slope that was not the right one. Nothing that a glance at the map can not solve… We mentioned before that the passage of the goats is famous, and it is because they are a few stairs anchored rather precariously in a vertical wall of about 40 meters (by eye, I can not find the exact data…). Now I see that in 2014 (the year after our trip), they were reformed and now they are, apart from safer, more beautiful because platforms have been placed from which you can stop to admire the landscape (which is spectacular from there). I must confess that we had a hard time, not only by the stairs themselves, but by the approach to them: we have to climb several steep slopes of loose and unstable rock and scree, which we did with a lot of difficulty, because we carried a lot of weight and our shoes demonstrated that one of their cons is the lack of grip. The fact is that after a while and several mini-avalanches of rocks, we managed to reach the stairs and climb them, not without a certain apprehension for how they moved. It is not pleasant to go up a vertical staircase from which your life is literally hanging and see how some of the points where it is anchored to the rock are loose… I always say that just at that moment my hair began to become gray. 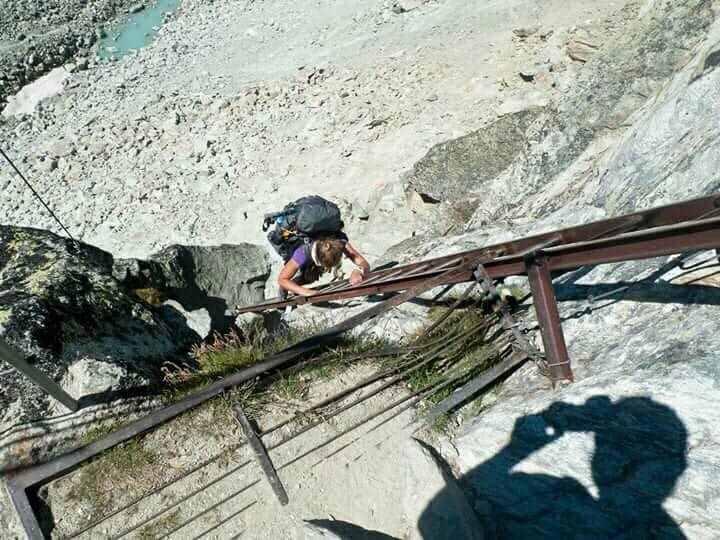 High shutter speed, to avoid a blurred image due to movement…

Finally, after a pleasant descent, we arrived at the town of Arolla (2006 m) and its campsite, where we settled. Total of the day, about 600 m. of elevation and something more than 1000 m of height loss.
The next day, we accused the tension accumulated in the previous days. We were tired, we haven’t slept well, and we knew that we were facing one of the least interesting days of the route, so (we confess) we took a bus to La Sage (1667 m) which saved much effort of the day. But let it be known that we also walk, because according to our scheme (totally different to the one in the guide) it was convenient for us to climb part of the stage of the next day, which was excessively long in case of not doing so. From La Sage, we started climbing towards Col de Tsaté (2868 m), and we camped in a magnificent site near Remointse du Tsaté (2480 m), near a small pond where we could clean ourselves and wash our clothes. 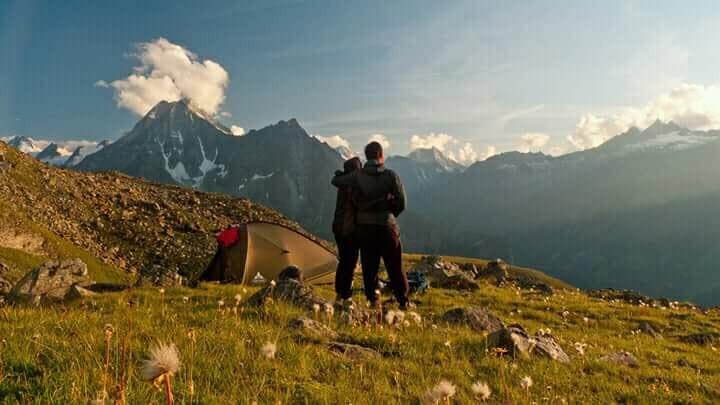 How nice it is to wake up in the middle of nature! With our batteries fully charged, the next day we finished climbing the Col du Tsaté, and another spectacular panorama opened up before us: on the right, the Moiry Glacier, and on the left, the lake of the same name, with a variety of awesome shades of blue. Instead of heading towards Cabin de Moiry and going backwards the next day, as the guide says, we decided to shortcut and turn north, skirting the lake and climbing the Col de Sorebois (2847 m). The shapes and colors that the clouds draw on the surface of the lake were impressive, and this, with the crowd of Edelweiss that covers the edges of the path, make the journey much more bearable. 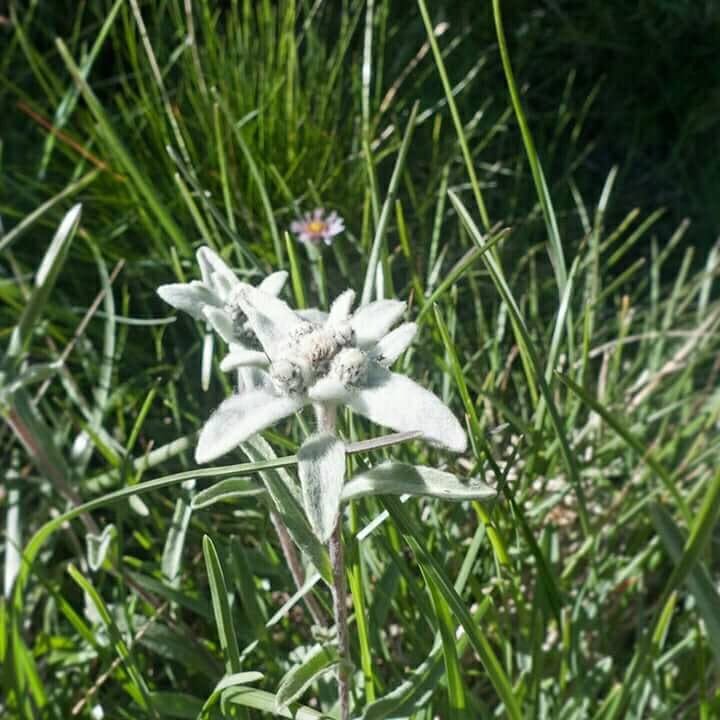 What was not so bearable was the long descent to Zinal (1675 m), almost 1200 m. of negative slope. Zinal is a small Swiss town, a typical ski destination. Supposedly there is a camping, but in the time that we were there, this was reduced to a few minimum facilities in the garden of a restaurant, at the other end of town. We feel somewhat cheated…

The next stage was one of the hardest we have ever done, not for the route itself (whose 1200 m. of height gain and 1000 m. of height loss were noteworthy), but because of the climatic conditions. From early morning we were accompanied by a light fog that did not let the sun shine during the whole day, causing the temperature to drop quite a bit; it didn’t look well, and indeed, just when we were beginning to climb the col of the day (Forcletta, 2874 m.) it started to rain. We could barely see the landscape that surrounded us, that according to the guide is quite impressive. But it went even worse after the end of the climb; we could not see almost anything, a thick fog wouldn’t let us walk with ease. Fortunately, the track was straightforward in those first stages of descent. Some time later, when we arrived to a group of houses and farms called Chalte Berg (2488 m), the navigation became quite complicated, so we chose to continue descending by a paved road that we knew that, although longer, would take us to our destination that night: Gruben (1822 m). Theoretically that night we were supposed to wild camp, but cold, wet and hungry as we were, we did not hesitate too much and we decided to stay in the only hotel in Gruben. Hot shower, nice dinner, washing and drying (with a hair dryer) our dirty and wet clothes, sleeping in a bed… The comforts of modern life were stronger than the desire to connect with the (in those moments, unpleasant) nature. 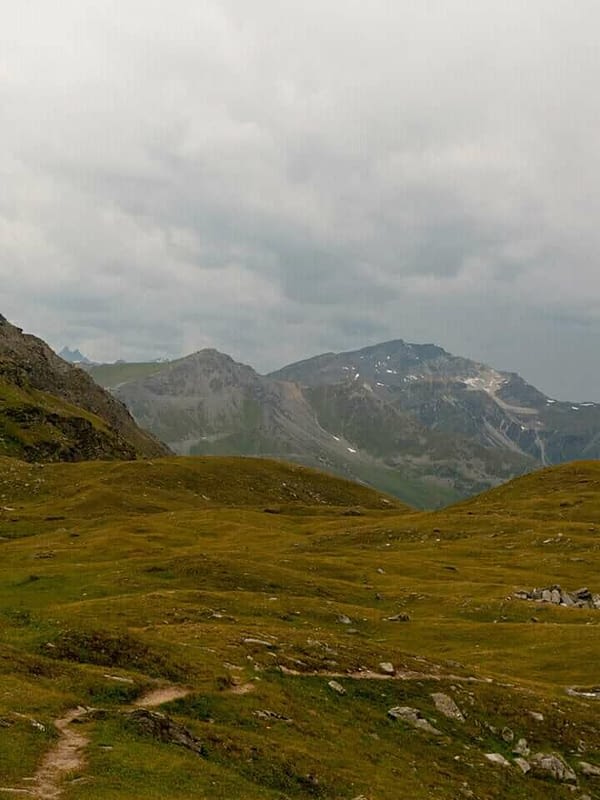 The next day the weather improved somewhat, but not much, at least not until we crossed to the other side of the Augsbordpass (2894 m.). Only then some timid rays of sunlight filtered through the thick layer of low clouds that accompanied us all day, and that avoided that we could enjoy the views. The climb is slow and flat, not uncomfortable, and the first downhill section is quite fun, because it runs through a terrain plagued by huge rocks where the path zigzags, forcing you to jump from one to the other. This way you get to one of the most spectacular panoramic points of the whole route (Twära, 2500 m.), which we could hardly enjoy because the clouds barely let us see anything. The route continues to Jungen, a small and beautiful hamlet of wooden houses, where a cable car tempts you again to abandon your intentions of being independent and arrive by your own means to the next point of the road, St. Niklaus. Here it is necessary to explain that from the almost 2900 m. of the Augsbordpass to the 1127 m. of St Niklaus there is a considerable descent of around 1800 m. So our sored knees greatly appreciated the saving of 800 m. that there is from Jungen (1955 m.). St. Niklaus is a proper city. Pretty, with a bucolic old part of wooden houses and geraniums in the ledges. But a city indeed, with its roads, its roundabouts and its cars. What it does not have is a camping, and since in Switzerland wild camping is prohibited, and the area is quite populated (which makes it difficult to find discrete camping sites), we did not want to complicate ourselves and we slept in a hotel.

The next day we had to make a decision: continue the route, extending it two more days to reach Zermatt (1606 m) through the Europaweg, or continue straight to Zermatt through the valley. The Europaweg runs for more than 30 km on higher and more exposed terrain than the rest of the trekking, and although it is famous for the beauty of the landscapes that are seen, it is more likely to be dangerous if the weather conditions are not good. As the weather in this last section of our trip was not accompanying, we decided to continue straight to Zermatt, for safety and because, in any case, with the clouds so low we were not going to see anything. This last walk is a pleasant walk near the river and the train tracks that runs through the Mattertal valley until you reach the final destination of the entire trekking. Truth to be told, arriving this way, the entrance to Zermatt could not be uglier. You go through fabrics, warehouses, supermarkets… We went to the campsite, which turned out to be a big disappointment: small, crowded, with shabby and dirty facilities, without a flat place to set up the tent. The ideal place to rest after all these days of walking (ironic mode on). We explored other accommodation options, to end facing with a reality that although we suspected, it surprised us with its magnitude: Zermatt is tremendously expensive. Earlier, during our walk, we had passed through Täsch (1438 m), a nearby town that has a cute campsite, so we retraced our steps and there we spent the few days we had left, spending the time sightseeing Zermatt and making daytrips. And yes, despite it seemed that the low clouds were never going to disappear, finally we got to see the Matterhorn. 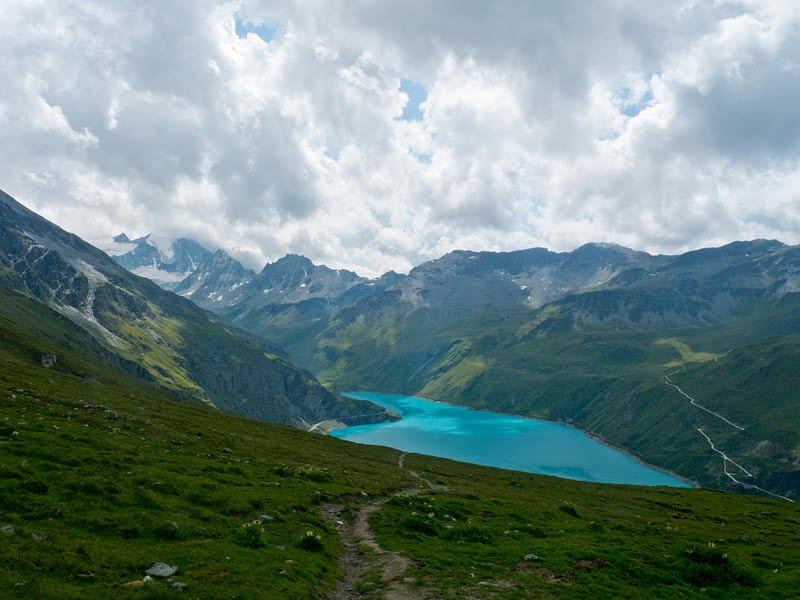 Overall, we can say that it is an impressive trekking, which runs through some of the most spectacular places in the Alps. The cumulative slope, with a minimum ascent and descent of 1000 m. every day makes it demanding, but not impossible. It is advisable to carry a light pack. In any case, it is very easy to plan and organize, because you are never too far away from civilization, and buying food along the way is relatively easy.

As always, an unforgettable experience, and in the best possible company.